An introduction to wsk, a straightforward and maintainable build system, by one of its contributors, data journalist Michael Keller of the Bloomberg Graphics team

At the start of 2016, we on the Bloomberg News Graphics team were looking to build a new project creation system. Our setup at the time largely left it up to the project creator to manage how files were built. While this gave creators flexibility, we thought a little more structure and common ground would be helpful.

Flexibility was an important element to preserve because our team is composed of journalists, designers and developers who create visual news stories on deadline. Each project might be different and need modifications to react to an unfolding news event.

Our build system would have to meet the following requirements (in no particular order):

What was out there

The most common choices, at the time, were Gulp and Webpack. We ended up not choosing either of them because each had elements that went against at least one of our goals.

Our first approach in service of these goals was to use vanilla npm scripts and the command-line interfaces for the libraries we wanted to use. We used chokidar-cli to trigger actions when files changed. Our package.json looked like this: 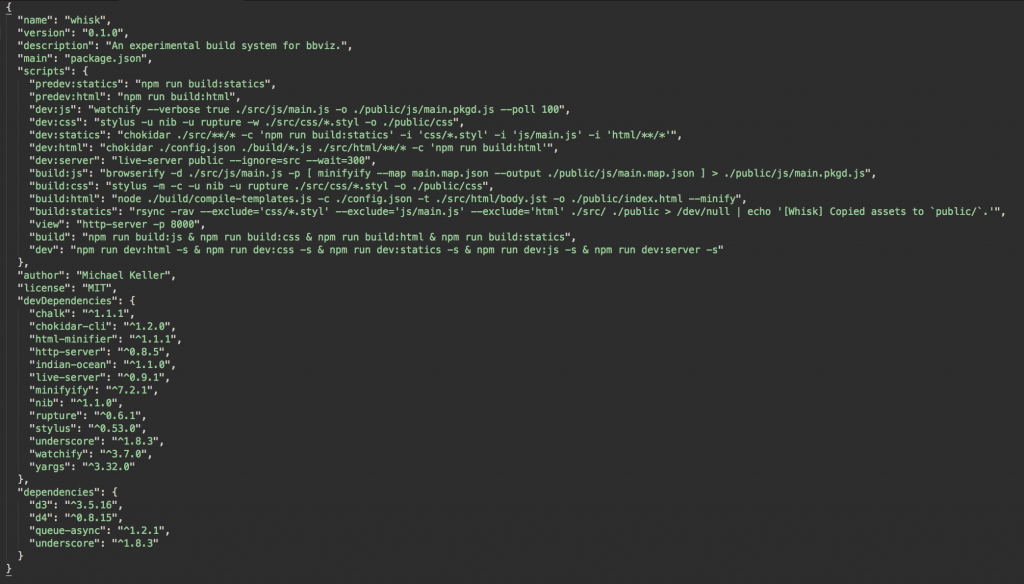 The functionality was okay, but we saw very inconsistent console output. 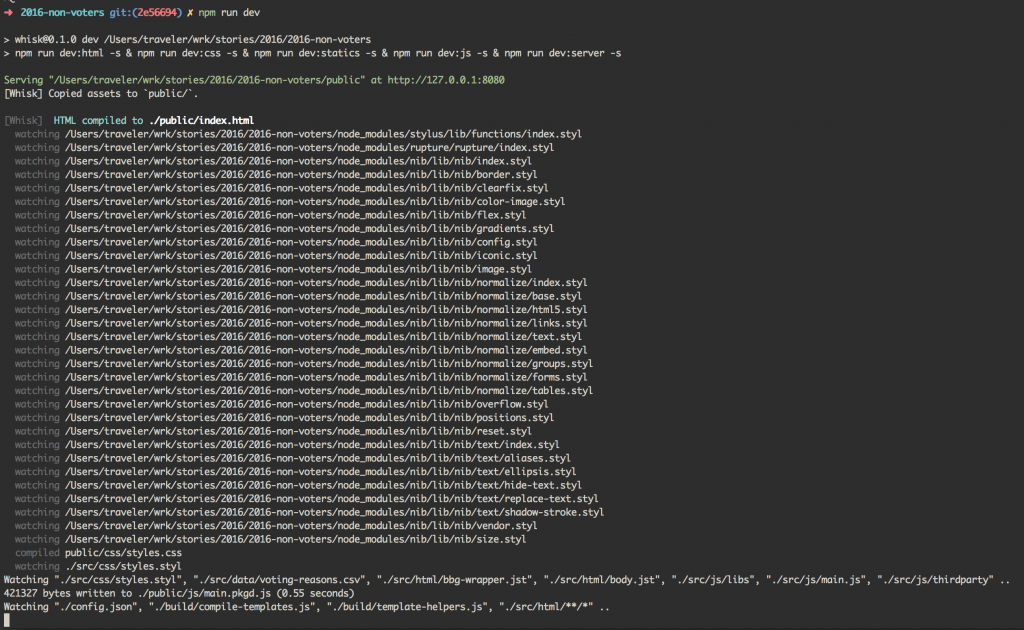 This concern goes beyond aesthetics. If the console is sending differently-styled output on changes, the user has to interpret multiple signals. This is distracting and makes it harder to recognize actionable feedback.

It would be better if normal compile messages were in a consistent format. Errors should appear in a different color and with a stack trace, if possible, to break up the formatting. The user can detect these changes more easily and attend to them.

Cognitively, the eye is better at noticing movement in the periphery of vision than it is at catching detail. If the build console is in the corner of the screen monitor, it’s easier to notice a disruption if there’s a break in consistency than if you have a number of variable-length messages printing all the time.

Since we were implementing a build system where one previously did not exist, clear notifications were important to separate system errors from project errors. It’s very easy to blame the new, unknown thing when there’s an error. Descriptive build notifications can help the user diagnose a problem with the project more quickly.

The first attempt at trying to make console outputs more consistent was piping them to a script that would standardize them. Here’s the new output: 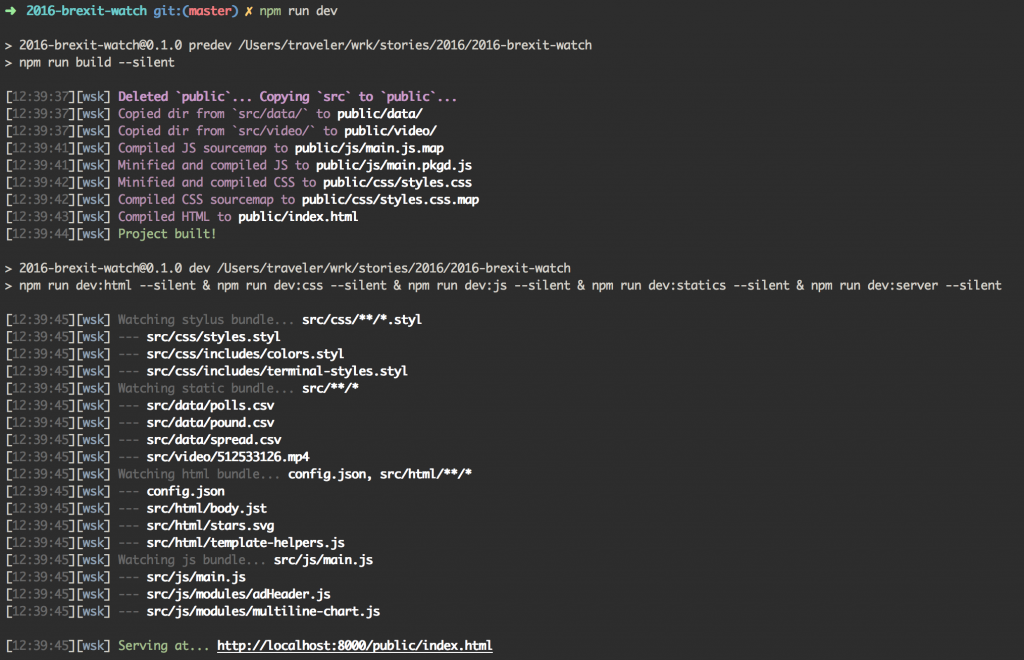 Because each of these scripts handles its output differently, we had to pipe console messages all over the place. Some went to /dev/null; others used 2>&1 to redirect stderr to stdout. It was a mess.

These experiments led us to create wsk and wsk-notify, which is our current setup. wsk is a watcher specification around chokidar that makes it easier to declare a glob of files to watch and vanilla JavaScript modules to run when those files change. wsk-notify is a module for standardized console and desktop notifications.

This setup works with our goals because:

Although we passed over using command-line APIs for other reasons, we found that using libraries directly via their JavaScript API also increased the number of options we had when using them. That makes intuitive sense, as you can only squeeze so much functionality into command-line flags.

An example wsk watcher file looks something like this:

The only requirement for a task file is that it export an onEvent function which takes the event type listed in type above, the path of the file that changed and any options specified. Anything you put in that function is up to you.

We built wsk to address our mix of skills and constraints. It might not be the right solution for everyone, but if you’ve run into issues with other plugins, been constrained by adding extra concepts into your pipeline (such as streams), or been frustrated when you want to use a new library and had to look for a “How to use with Webpack/Gulp/Grunt” section of the readme, wsk might be helpful for you.

Over the last 18 months of usage, it’s proven to be a flexible and maintainable system. It has powered projects as simple as one-off graphics to multi-day or multi-page series that function more like static-site generators.

You can find usage examples and more documentation on the wsk and wsk-notify sites.